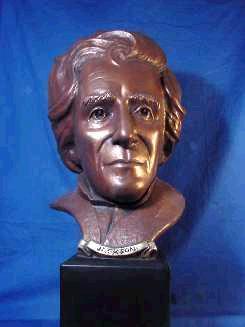 Andrew Jackson's quote
"One man with courage makes a majority."

The mask is also available in a limited edition of 45 foundry cast bronze. Prices on request from the artist Robert R. Toth.

A small bust of Jackson is also available.

Andrew Jackson won fame as an Indian fighter and as a general in the War of 1812. He was nicknamed "Old Hickory" because of his toughness.

The seventh President of the United States, Andrew Jackson was the first President born in a log cabin. Earlier Presidents had come from well-to-do families.

Andrew Jackson's strong actions, particularly during disputes involving the Bank of the United States and the rights of states, won him much praise. He became known as a champion of the people.

The unveiling of “The Jackson Sculpture” by artist Robert R.Toth, took place during the Andrew Jackson Society meeting on March 2nd 2001.

Toth said “This is one of my proudest moments.”

Similar works by Robert Toth can be viewed on the MASTERS WEB page.

All Pictures and Artwork are Copyright © RT-DESIGNS USA
All Rights Reserved.